What are "E.M. Mudballs" and do they work?

WHAT ARE "E.M. MUDBALLS" AND DO THEY WORK?
By Wong Ee Lynn 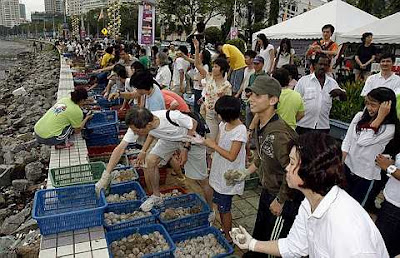 We often hear of "E.M. Mudballs" being thrown into rivers and seas during beach and river cleanup campaigns. These mudballs purportedly contain properties that will purify water, improve water quality and solve sanitation problems. Why is it that we have never heard about these miraculous mud balls before, and what is the science behind them?

An effective microorganism ("E.M.") refers to any of the predominantly anaerobic organisms blended in commercial agricultural amendments, medicines, and nutritional supplements based on the trademarked product originally marketed as EM-1 Microbial Inoculant, aka Effective Microorganisms and EM Technology. These blends are reported to include:
* Lactic acid bacteria: Lactobacillus casei
* Photosynthetic bacteria: Rhodopseudomonas palustris
* Yeast: Saccharomyces cerevisiae
* Others: beneficial microorganisms that exist naturally in the environment may thrive in the mixture.
EM Technology is purported to support sustainable practices in farming and to improve and support human health and hygiene, compost and waste management, disaster clean-up (the Bangkok floods of 2011, the Southeast Asia tsunami of 2004, the Kobe earthquake, and Hurricane Katrina remediation projects).

The concept of "friendly microorganisms" was developed by Professor Teruo Higa, from the University of the Ryukyus in Okinawa, Japan.

The Effective Microorganisms (EM) concept is considered controversial in some quarters. There is no scientific evidence to support all of its proponents' claims. This is acknowledged by Higa in a 1994 paper co-authored by Higa and soil microbiologist James F Parr, a USDA Research, they conclude in that, "the main limitation...is the problem of reproducibility and lack of consistent results."

Many of the claims about "EM" are being put to the test and research is being conducted by scientists to find out the effectiveness of EM mud balls as biological control and water purification agents. None of the scientific papers published so far seem to give any real evidence of the beneficial effects of EM.

Whenever an organism is to be introduced into a natural environment, careful study must be conducted to assess its impact on the ecology of the environment. Even where an organism is native to an environment, a sudden influx of a single species or a group of species will alter population dynamics in the ecosystem and may result in long term negative consequences. The risks of introduced/invasive species are now well-recognised.


Since EM functions by overwhelming existing microbial populations, haphazard andcontinuous use of EM threatens to alter our environment and reduce microbial diversity. Continuously using EM freely and abundantly with poor understanding of its consequences is reckless. Even though EM is promoted as consisting of “naturally-occurring microorganisms”, they may not occur naturally in the environments to which they are applied.

SO WHAT SHOULD WE DO?


The variety of claims made by EM proponents is astounding and borders on pseudoscience. Governments, corporations and organisations that promote or endorse the use of EM mudballs appear to be content to rely on anecdotal advice without examining the science behind EM mudballs. Even if EM Mudballs do work (and right now there is no evidence that they do), their positive effect on water quality, if any, is only fleeting. The problem of water pollution must be addressed at the source. No amount of mud balls and commercial products can help improve water quality if there is still discharge of wastewater, pollutants, industrial and agricultural runoffs and litter into our waterways. In order to improve the state of our rivers, waterways and beaches, Malaysians need to be proactive about reducing waste, managing solid and liquid waste efficiently, managing stormwater, reducing pollution and regulating industrial and agricultural waste, among others.

At your next beach or river cleanup, Green Living's advice to you is to focus on picking up litter and not waste your time and energy on fads and fallacies.